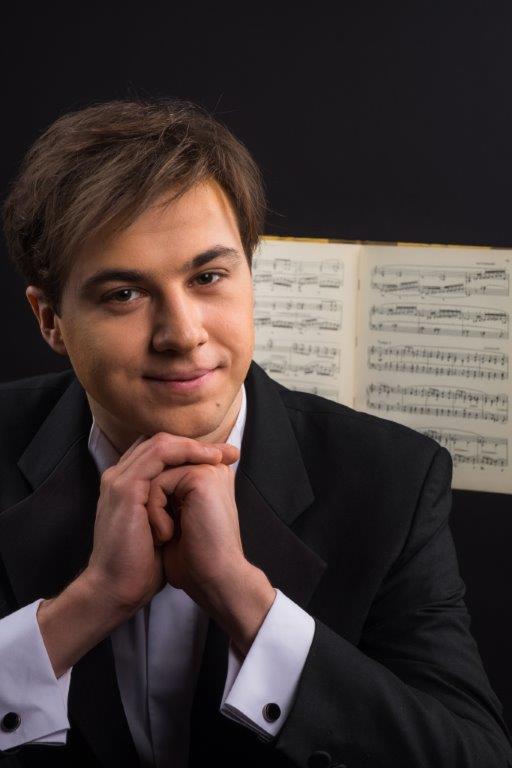 Dmitrii Kalashnikov was born in Moscow. He has been a postgraduate student at the Royal College of Music in London since 2018, in the class of Professor Vanessa Latarche as a Ruth West Scholar supported by the Neville Wathen Scholarship, and more recently as a Blüthner Pianos Scholar. His earlier studies began at the age of five at the Moscow secondary special music school named after Gnessin. In 2017 he graduated with honours from the Moscow State Conservatory P.I. Tchaikovsky, where he was taught by Professor Elena Kuznetsova.
His prizes have included the Queen Elizabeth The Queen Mother Rosebowl at the RCM, awarded to a student of distinction, the winner of the 2019 Final of the Jacques Samuel Intercollegiate Piano Competition (London) and the first prize at Les Étoiles du Piano International Piano Competition, France.  Last year he won first prize in the Junior Intercollegiate Piano Competition (Beethoven Piano Society of Europe).
Dmitrii has performed regularly with the Russian National Orchestra.  Other performances have included those at the House of Music in Moscow, the Concert Hall of the Mariinsky Theatre in St. Petersburg, and major halls in UK, France, Austria, Estonia, Italy, Poland, Belgium. He performed the Hummel Piano Concerto no.2 with the RCM Symphony Orchestra as winner of the RCM Concerto Competition, conducted by Festival Director Martin André. In 2019 Imogen Cooper chose Dmitrii for her master-classes after an audition at the Royal Academy of Music, which sponsors the Imogen Music Trust Fund.
Helping others plays a big role in Dmitrii’s life. For several years, together with a young talented artist - Gavriil Kochevrin,  he has organised evenings for the benefit of orphans in the House-Museum of Marina Tsvetaeva.
​ Dmitrii will play the Concerto  no.1 by Tchaikovsky next year with  the   London Philharmonic Orchestra.
piano recital - 23 July
© Islington Festival of Music and Art
Registered Charity Number 1198568