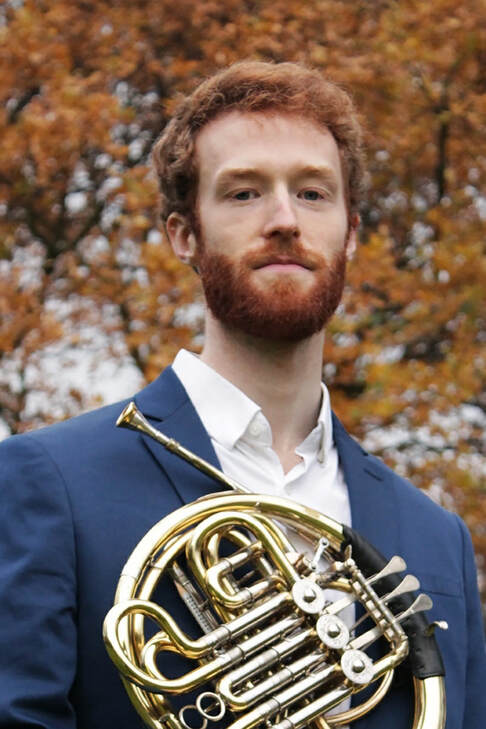 Fabian van de Geest is a graduate of the Purcell School where he studied the Horn with Sue Dent before continuing his studies with a scholarship at the Royal College of Music under Simon Rayner and Tim Jones. During this period the Erasmus programme afforded him the opportunity to spend a semester studying at the Mozarteum in Salzburg with Rodovan Vlatkovic, and he gained additional orchestral experience with the London Sinfonietta Academy and the English National Opera Evolve programme. Fabian was awarded a postgraduate award from Help Musicians, UK to attend the Guildhall School of Music, where he completed an MMus degree with distinction under Richard Bissil. In addition to the illustrious list of teachers he has been privileged to have, he has attended masterclasses with Stefan Dohr and Fergus McWilliam.
Fabian plays with many of the leading orchestras of Great Britain both in the UK and on tour throughout Europe. He has played extensively with the Royal Opera House, Covent Garden, the London Symphony Orchestra, London Philharmonic Orchestra, Philharmonia Orchestra, City of Birmingham Symphony Orchestra, under such distinguished conductors as Bernard Haitink, Esa-Pekka Salonen, Vladimir Ashkenazy, and Herbert Blomstedt,
both as a section player and principal.
Playing in smaller ensembles is a particular focus, and he is sought-after as a chamber music partner, recently appearing at the the Highgate International Chamber Festival, at Klosters Music Festival, in Switzerland with his brass quintet - Skyline Brass, as well as with other ensembles at venues such as Marsac, France, and Southwell Music Festival. This passion extends to chamber orchestras and he appears regularly with ensembles such as the Scottish Chamber Orchestra, the Academy of St Martin in the Fields and the Aurora Orchestra.