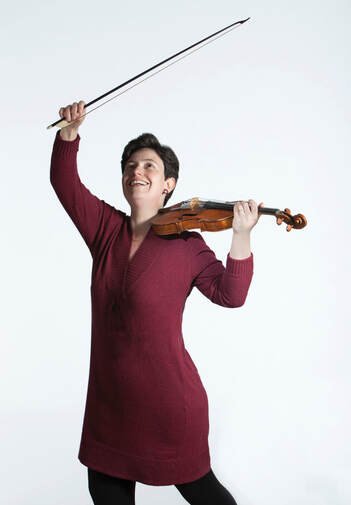 © Eric Richmond
A fourth generation musician, Kati Debretzeni began playing the violin with Sofia Szabó in her native Romania, finishing her studies with Ora Shiran in Israel. Her passion for historical performance took her to London, where she studied the Baroque violin with Catherine Mackintosh and Walter Reiter.
Since 2000, Kati has led the English Baroque Soloists under John Eliot Gardiner, with whom she has performed all over the world. Her playing can be heard in the group’s recordings of J.S. Bach’s cantatas (recorded live during the unforgettable Bach Cantata Pilgrimage 2000), the Brandenburg concertos and the more recent recordings of the Mass in B Minor, the St Matthew Passion and Monteverdi’s operas. She recently recorded violin concertos by J.S. Bach (including her own arrangement of BWV 1053) with the orchestra to critical acclaim.
In addition, she is one of the leaders of the Orchestra of the Age of Enlightenment, and has collaborated with conductors such as Simon Rattle, Adam and Ivan Fischer, William Christie, Ottavio Dantone and Vladimir Jurowski. She has directed the group from the violinist’s chair in works ranging from Baroque repertoire to Beethoven, Mendelssohn and Berlioz, and has recorded Vivaldi’s Four Seasons following performances in collaboration with the Henri Oguike Dance Company.  Kati is in demand internationally as leader, soloist and director, including Zefiro (Italy), Akademie für Alte Music Berlin (Germany), Barokkanerne (Norway), Sevilla Baroque Orchestra (Spain), Amaryllis (France), Victoria Baroque (Canada) and the Budapest Bach Consort (Hungary). A keen chamber musician, Kati has recorded award-winning CDs with Ricordo and Florilegium. In the last decade she has been a member of Trio Goya. Their recording of Beethoven’s opus 1 piano trios has recently been released to critical acclaim.
As a teacher, Kati has given masterclasses in the U.K., Germany, Italy, Norway, Canada, Israel and Hungary. She is on the faculty of the Royal Conservatory of The Hague, and her former students make music the world over.