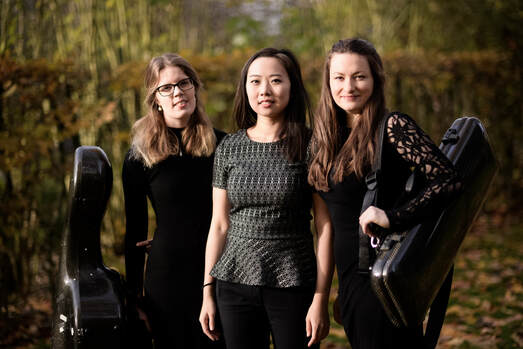 The Mila Piano Trio is a UK-based ensemble who met whilst studying at the Royal Academy of Music in 2015. Recent performances have included debuts at St. John’s Smith Square and at St Martin-in-the-Fields as finalists of the 2018 Chamber Music competition, as well as performances across the UK and Portugal.  The trio won first prize at Verao Classico in Lisbon in August 2018 and  have won prizes in the Isaacs and Pirani Competition and in the RAM’s Historical Women prize.
The Mila Piano Trio is also involved in educational work, recently working with Water City Music giving workshops and concerts to students in Southwark as well as working in schools in London, Cotswolds, Winchester and Romsey.
Graduates of The Royal Academy of Music, their chamber music tutors have included Amandine Savary, Levon Chilingirian, Michael Bochman and Felix Schmidt and have received masterclasses from Guy Johnston and Sun-Won Yang and Alasdair Beatson. The Mila Piano Trio is currently a member of ChamberStudio at Kings Place where they are mentored by Adrian Brendel. They have also been attending MusicWorks with Catherine Manson and James Boyd and look forward to further masterclasses within the scheme.
© Islington Festival of Music and Art
Registered Charity Number 1198568