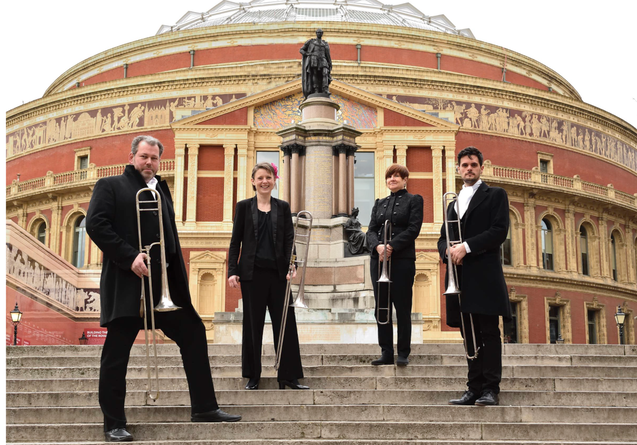 The Concert Trombone Quartette is the UK’s first period instrument trombone quartet specialising in historically informed performance practice. Our remit is to perform music originally written for the trombone, with repertoire spanning over 400 years from the Baroque, Classical & Romantic periods, through to the early 20th century on instruments from the time of the compositions. CTQ takes its name from a prominent trombone quartet in London (1892–1896), all members being leading professional players of their time including being members of the Queen’s Hall Orchestra; playing in the first ever Proms Concerts Series (1895)  directed by maestro Henry Wood - who even
accompanied the quartet at the same venue! In recreating this quartet, we trace the evolution of this  long-standing idiom, performing music by Schütz, Beethoven, Bruckner & Bozza alongside works for voices and trombones in sacred motets and secular instrumental works, demonstrating the trombone’s versatility.
In recreating the sounds and colours with which these composers would have been familiar with, we explore the historical approach and context of these works with the benefit of 21st century knowledge in historically informed performance.
CTQ was formed in 2018 and is currently working on multiple large-scale projects both instrumentally and
collaboratively with choirs, with a view to expanding the awareness of the contextual and musical history
of the trombone. Its debut performance was in 2018, a collaboration with The Newcastle Bach Choir, in a programme of music by Anton Bruckner and his contemporaries -  focusing on the origins and history of the use of the trombone in the Romantic period.
Aug 2021 saw their debut instrumental recital for the Purbeck Arts Week Festival (PAW) in a unique programme - The Evolution of the Trombone Quartet. CTQ and Studio 5 trombone quartet shared this recital, encompassing rare historical works from four centuries including collaborative octets. In October 2021, CTQ collaborated with the World Renowned Choir, Ex Cathedra under the direction of Jeffrey Skidmore in a unique performance and   reconstruction of the music from Beethoven’s own  funeral of 1827 – researched by Adrian France.